I started watching Anthony Bourdain in No Reservations when I was a teenager. He had a wit about him, and an elegant but no nonsense means of writing about the world. He sucked me into his journeys in Ireland or Kenya and he did everything from drinking cow’s blood in Kenya to vegetarian dishes in India with humor, grace, and intelligence.

Bourdain moved through the world as something of an enigma. He was fully engaged with his location, yet he had a distance, a perspective, an observer’s mind as he met people and filmed a story. He existed in and out of the scene all at once, which made for a compelling look into his mind and craft.

Sure, he condemned vegetarians and Colorado, both which are near to my heart, but I forgave the grumpy uncle figure that could WRITE. 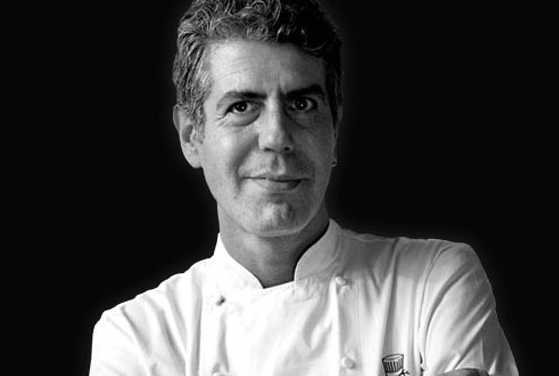 He could WRITE. Bourdain pieced together vignettes that made the viewer stop and think, or day dream, or question their perspective on the world. He spun tales and myths and legend on his own that no one dared question. They were eloquent and smart, thick with descriptors and layers of thought and depth that many of his peers could never match.

I loved watching Bourdain in his element, elbows deep in meat and alcohol, talking with a local chef about the importance of animal innards to make distinct flavors and dishes. Bourdain was a compelling force, a person that could not be tamed or cut down, he just existed, and he shared with the world what that looked like.

“Travel changes you. As you move through this life and this world you change things slightly, you leave marks behind, however small. And in return, life—and travel—leaves marks on you.”

When I woke up this morning to read he was gone it hit me, another hero had passed, and my heart is heavy. Another hero was gone from my list of “I hope to meet someday’s”.

Bourdain’s was a specific meeting I wanted where I told him he was so wrong about Colorado and vegetarians, and that I could prove him wrong on both if he just came to Fort Collins.

But the world lost this man today, at 61, in a small and beautiful city in France. He died doing what I hope he ultimately loved, but then again looks can be deceiving.

Suicide is a complex monster, one that I have battled since the age of 11. It creeps in at the best of times, and it settles in at the worst of times. Sometimes the world is absolutely great, and then three hours later when you are alone, it tricks you into thinking that you have nothing to get up for the next day. It’s a truly awful monster.

At 27 I have learned that I have to throw the monster crumbs, a piece of toast or a cookie once in a while. I acknowledge it, and then I put it back in its box, back under the bed, and move on with my life.

It’s too soon to know about Bourdain’s monster, but it won this time. The truth is that many of the best people, the most skilled, are the ones whose monsters are the meanest. It shows that money and fame are not enough to keep the monster at bay. And why would we assume that is the cure anyway?

We lost Kate Spade this week, and countless other non-famous people to their monster; and they all stood at an endless variety of different parapets in their existence. Nothing in life can really dictate when the battle is lost, it’s too complicated and individual to ever determine it completely.

So, I leave my jumbled head, on the road, doing what Bourdain inspired me to do, with this point: We lost a great artist today, the reasons are not important. The greatness that Bourdain, or Spade, or Robin Williams or countless others, brought to this world is the importance.

My thoughts are with the families of those lost this week. If you or someone you know is struggling, please know that there are many great resources.

For more information on the rise of suicides in the United States: click here